Billboards are 2D elements incrusted in a 3D world. Not a 2D menu on top of everything else; not a 3D plane around which you can turn; but something in-between, like health bars in many games.

What’s different with billboards is that they are positionned at a specific location, but their orientation is automatically computed so that it always faces the camera.

Just compute where your point is on screen, and display a 2D text (see Tutorial 11) at this position.

On the plus side, this method is really easy, and the billboard will have the same size regardless of its distance to the camera. But 2D text is always displayed on top of everything else, and this can/will mess up the rendering and show above other objects.

This one is usually better and not much more complicated.

The goal is to keep the mesh aligned with the camera, even when the camera moves :

You can view this problem as generating an appropriate Model matrix, even though it’s is much simpler than that.

The idea is that each corner of the billboard is at the center position, displaced by the camera’s up and right vectors : 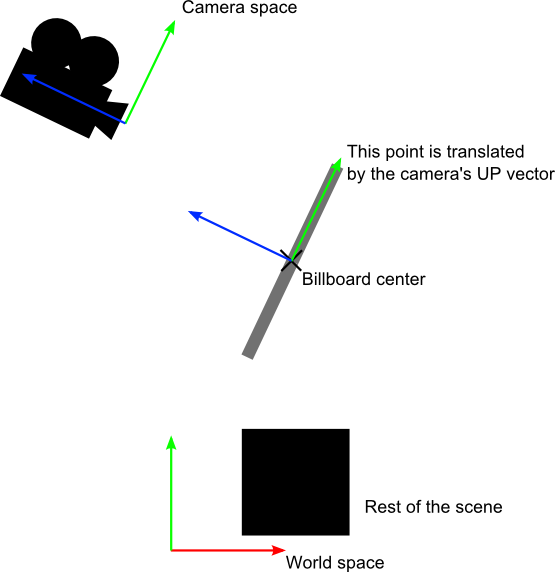 Of course, we only know the billboard’s center position in world space, so we also need the camera’s up/right vectors in world space.

In camera space, the camera’s up vector is (0,1,0). To get it in world space, just multiply this by the matrix that goes from Camera Space to World Space, which is, of course, the inverse of the View matrix.

An easier way to express the same math is :

Once we have this, it’s very easy to compute the final vertex’ position :

And presto, here's the result. Wasn't this easy ?

For the record, here’s how squareVertices is made :

As you can see above, the size of the billboard changes with respect to the camera’s distance. This is the expected result in some cases, but in others, such as health bars, you probably want a fixed-size instead.

Since the displacement between the center and a corner must be fixed in screen-space, that’s exactly what we’re going to do : compute the center’s position in screen space, and offset it.

Remember that at this stage of the rendering pipeline, you’re in Normalized Device Coordinates, so between -1 and 1 on both axes : it’s not in pixels.

Some systems model faraway trees and lamps as billboards. But you really, really don’t want your tree to be bent : it MUST be vertical. So you need an hybrid system that rotates only around one axis.

Well, this one is left as an exercise to the reader !