With each new generation, the performance of GPU increases, allowing to render more triangles and more pixels. However, raw performance isn’t the only concern. NVIDIA, AMD and Intel also improve their graphic cards by providing more functionality. Let’s have a look at some examples.

Back in 2002, GPUs had no vertex shaders or fragment shaders : everything was hardcoded inside the chip. This was called the Fixed-Function Pipeline (FFP). As such, the most recent version of the API, which was OpenGL 1.3, proposed no way to create, manipulate and use so-called “shaders”, since it didn’t even exist. But then NVIDIA decided that it could be handy to describe the rendering process with actual code, instead of hundreds of flags and state variables. This is how ARB_fragment_program was created : there was no GLSL, but instead you could write stuff like this :

But obviously to tell OpenGL to use such code, you needed special functions, which were not yet in OpenGL. Before moving on to the explanations, one more example.

Ok, you say, but this ARB_fragment_program is too old, surely I don’t need this extension stuff anymore ? Well there are newer extensions which are very handy. One of them is ARB_debug_output, which expose a functionality that doesn’t exist in OpenGL 3.3 but that you can/should use anyway. It defines tokens like GL_DEBUG_OUTPUT_SYNCHRONOUS_ARB or GL_DEBUG_SEVERITY_MEDIUM_ARB, and functions like DebugMessageCallbackARB. The great thing about this extension is that whenever you write some incorrect code, for instance :

you can have an error message and the exact location of the problem. Lessons learned : 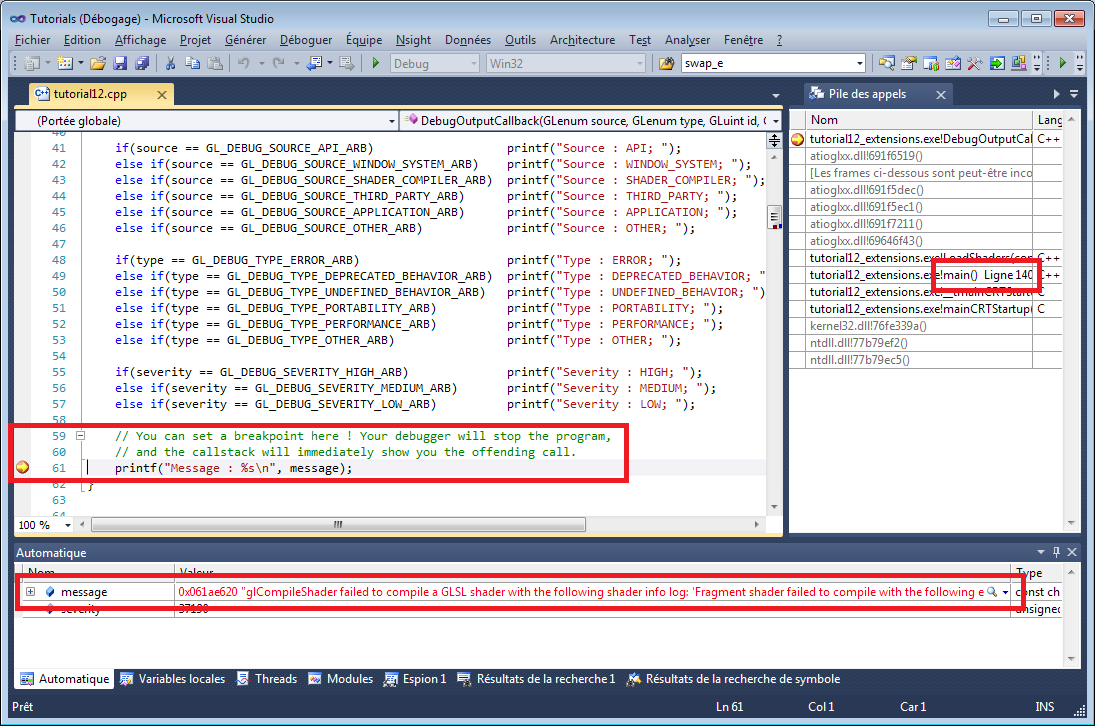 Getting an extension - the hard way

The “manual” way for checking is an extension is present is to use this code snippet (from the OpenGL.org wiki) :

Getting all extensions - the easy way

All in all this is very complicated. Libraries like GLEW, GLee, gl3w, etc, make it much easier. For instance, with GLEW, you just have to call glewInit() after you created your window, and handy variables are created :

( a word of caution : debug_output is special because you have to enable it at context creation. In GLFW, this is done with glfwOpenWindowHint(GLFW_OPENGL_DEBUG_CONTEXT, 1); )

The name of each extention contains information on its availability :

EXT : A generic extention. ARB : the extention has been accepted by all the members of the OpenGL Architecture Review Board (EXT extentions are often promoted to ARB after a while). NV/AMD/INTEL : Quite self-explanatory =)

Let’s say that your OpenGL 3.3 application needs to render some large lines. You could write a complicated vertex shader to do that, or simply rely on GL_NV_path_rendering, which will handle all the complicated stuff for you.

You will thus have code that look like this :

One usually choose to use an extention when the gain in rendering quality or performance outweights the pain of maintaining two different paths.

For instance, Braid (the 2D game where you travel in time) has all kinds of image-warping effects when you mess with the time, which simply aren’t rendered on older hardware.

With OpenGL 3.3 and above, you already have 99% of the tools you’re likely to need. Some extensions can be very useful, like GL_AMD_pinned_memory, but this is often not like a few years ago when having GL_ARB_framebuffer_object ( used for Render To Texture ) could make your game look 10 times better.

If you have to handle older hardware, though, OpenGL 3+ won’t be available, and you’ll have to use OpenGL 2+ instead. You won’t be able to assume that you have all the fancy extensions anymore, and you’ll need to cope with that.

For further details, see for instance the OpenGL 2.1 version of Tutorial 14 - Render To Texture, line 167, where I have to check the presence of GL_ARB_framebuffer_object by hand. See also the FAQ.

OpenGL Extentions provide a nice way to extend OpenGL’s capabilities, depending on your user’s GPU.

While extentions are nowaday mostly for advanced use since most functionality is already in the core, it’s still important to know how they work and how you can use them to improve your software - at the expense of higher maintainance.