This last method is a nice middleground between the “hacky” pure-OpenGL implementation, and having to integrate a fully-featured physics engine just to do raycasts and picking.

This tutorial uses concepts and functions from the Bullet tutorial, so make sure you read it first.

Instead of relying to Bullet intersect a ray with a Collision Shape, we’re going to do this ourselves.

As we have seen, there are many possible collision shapes. Spheres are very easy to intersect, but for many object, they represent the original mesh very poorly. On the other side, intersecting the ray with each triangle of the original mesh is way to costly. A good middleground are OBB : Oriented Bounding Boxes. There are quite precise (but it depends on your input geometry), and quite cheap to compute.

An OBB is a box that fits the mesh, and when the mesh is translated or rotated, the same transformation is applied to the box : 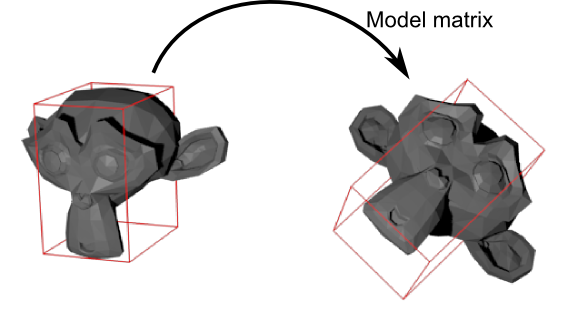 ( The algorithm and the pictures are largely inspired from Real-Time Rendering 3. Buy this book ! )

Consider the OBB below. On the X axis, this is delimited by 2 vertical planes, colored in red here. When intersected with the ray (a very simple operation), it gives 2 intersections, one “near” and one “far” : 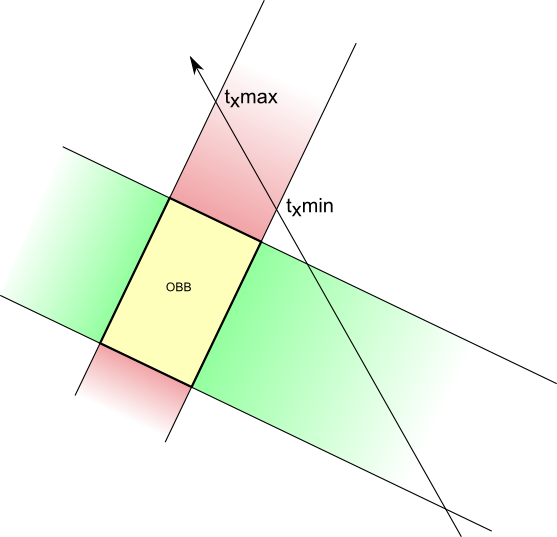 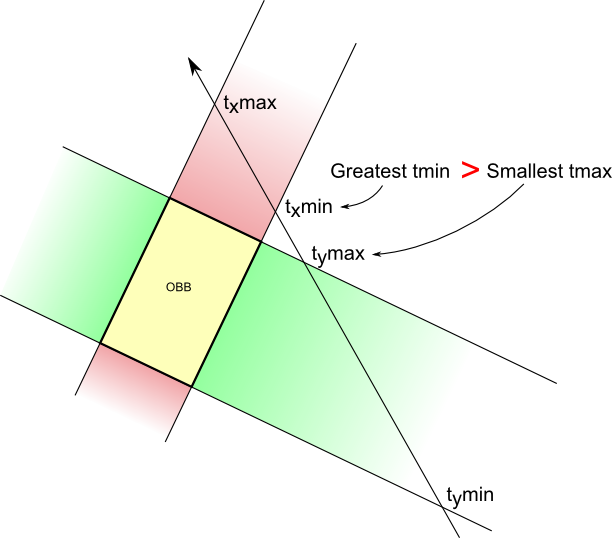 But if this order changes (you enter the green area -> you enter the red area), then you know there is an intersection ! 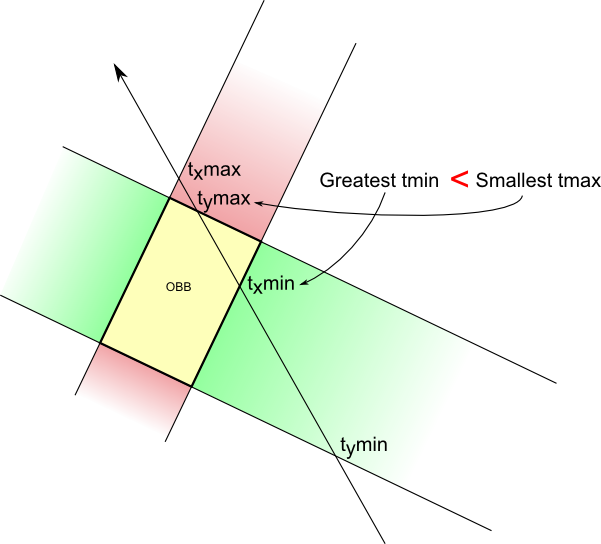 Let’s put this in practice.

Our Ray - OBB intersection function will look like this :

Now, let’s compute the intersections with the 2 planes that delimit the OBB on the X axis :

t1 and t2 now contain distances betwen ray origin and ray-plane intersections, but we don’t know in what order, so we make sure that t1 represents the “near” intersection and t2 the “far” :

We can update tMin and tMax :

And here’s the trick : if “far” is closer than “near”, then there is NO intersection.

This was for the X axis. On all other axes it’s exactly the same !

The TestRayOBBIntersection() functions enables us to test the intersection with only one OBB, so we have to test them all. In this tutorial, we simply test all boxes one after the other, but if you have many objects, you might need an additional acceleration structure like a Binary Space Partitionning Tree (BSP-Tree) or a Bounding Volume Hierarchy (BVH).

Note that this algorithm has a problem : it picks the first OBB it finds. But if this OBB is behind another OBB, this is wrong. So you would have to take only the nearest OBB ! Exercise left to the reader…

There are many other intersection routines available for all sorts of collision shapes; see http://www.realtimerendering.com/intersections.html for instance.

If you need precise intersection, you will have to test ray-triangle intersections. Again, it’s not a good idea to check each triangle of each mesh linearly. Another acceleration structure is required.